I've decided that I'm gonna add Roger Maris as one of my collecting goals. He's a bit cheaper than the Mick and in my eyes he should still hold the record for the HRs in a single season. Look at the list, all of the players ranked ahead of him were juiced. You might be thinking I'm crazy especially after seeing the price for the '58 or '62 topps, but once you see what I snagged at the card show you opinion might change. As of right now these cards are what I'm saving up for unless someone out there has them and are willing to trade......long shot I know. 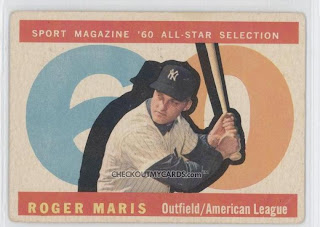 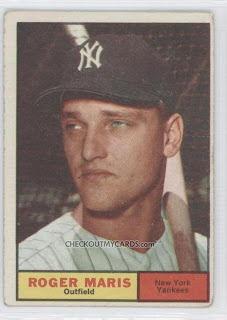 Seriously, I'll trade anything in my collection for the '60 All Star....I found it at the card show for a reasonable price, but I couldn't part with all of my money on one card. Hopefully the seller will be back next month.
I'll have a post put up soon on what I got at the card show.
Posted by A2 Wolverine at 5:08 PM 1 comment:

Sorry for the erratic posting, school is winding down and with that I've had tons of due dates coming up. I've finally got some free time to do a quick update. This Saturday Dennis http://toomanycg.blogspot.com/ and I are going to the local card show. I'm pretty excited. This will be my first card show since I was a kid, but this time I'll have money of my own. This weekend I'll be after some more Damon's to add to my pc, and one or two cards off of night owl's http://nightowlcards.blogspot.com/ wish list. He recently did a post on his own card show experience and managed to snag an original base card of Al Kaline for 2 bucks! I reached out to him about a possible trade and he said the condition isn't perfect, but that's fine by me. It looks like I'll be able to knock out another of my collecting goals pretty soon. There's also a few other cards I'll be after for other trades which hopefully I'll be able to post about soon.
I think this card will be my goal for this Saturday....hopefully someone will have it. 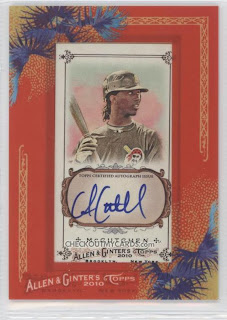 Also shoot me an email if you guys are after anything in particular, and we can work out a trade later.
Posted by A2 Wolverine at 4:22 PM 1 comment:

I got the cards I ordered from COCM last week and have just now had the chance to make a post about them. I feel that I did pretty well. I set a 40.00 price limit aside and including the outrageous shipping my order came out to 35.00. I've already traded one of the cards, Al Montoya ex U of M goalie, away to Dennis over at http://toomanycg.blogspot.com/. This was my second trade with Dennis and I'll be posting a picture of the Felix manupatch card I got in return soon. Without further adieu..... 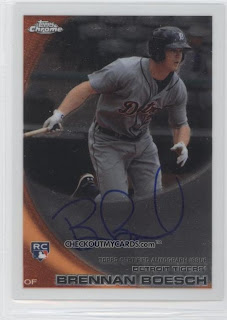 Boesch had an awesome first half of the season last year(don't they all). It looked like he was a major candidate for ROY, but unfortunately his batting avg dropped and his so rate went up. After winning his spot on the team I have hopes that he'll be more consistent. I'll hear offers on this card if anyone out there is interested. 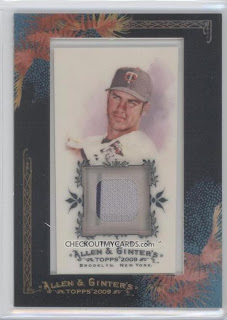 This is an awesome card that I got for a steal! There's even a pin stripe. I like Mauer which is hard to say since he plays for a division rival, but come on who else can rock sideburns like he can? 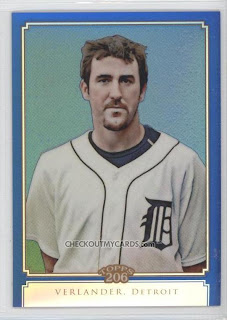 Verlander blue border enough said. I hope this is his year for the Cy Young. 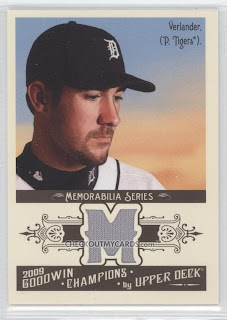 A relic Verlander from one of my favorite sets. It's a shame that upper deck lost their license cause these were some bad ass cards. 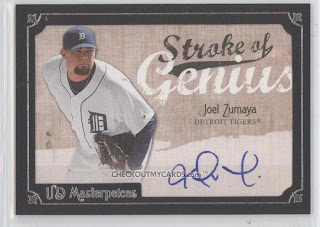 I've been a big fan of Zumaya since he made his debut. He constantly tops off at 100 mph with his pitching. When he's healthy he's one of the best mid inning relief men out there. Hopefully his elbow will heal soon so so we can see him smoke batters. 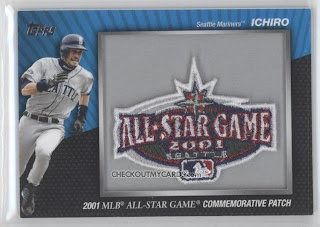 What can be said about a player like Ichiro? He can place the ball anywhere he wants, he has an unusual batting stance, and offers life to a rather lack luster team. He replaced Griffey as my favorite Mariner growing up. With any luck he'll reach the 3,000 hit mark before he's too old....hell who am I kidding he'll play until he's 50. 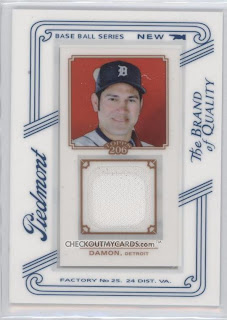 I finally have a relic of Damon in a Tigers uniform that cost me less than a pack of Topps Heritage. Damon has been and will always be one of my favorites. When I was little I was a part of the Big Brother Big Sister program and the guy I was placed with was from KC. When we first met he got me a few packs of Cards and Damon was one of the first that I puled and ever since he's been that player for me. This card is a welcome addition to my pc. 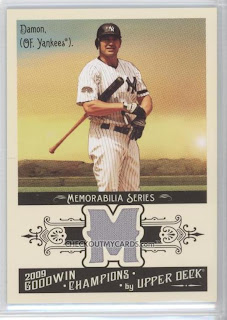 I had to add another Goodwin. I tried to go after a Feliz like this one, but the seller wouldn't budge on price. Anyway I've lost motivation to continue to write. Again I'll hear offers for the Boesch and possible the Mauer so if any of you out there are interested send me an email!
Posted by A2 Wolverine at 11:18 AM 2 comments: