The next card I will highlight is one that spent a long time on my want list. Well not this kid exactly, but the base will work just as well. I didn't want to spend the extra 15 bucks for the refractor off of COMC. Actually I didn't have to spend anything on it. A long while ago I completed a trade with the other Dustin over at cootveal. He happened to highlight some cards he picked up at show and I quickly pounced on several of them. I would highlight the others but I'm limited to what I have around the office until I remember to do some scanning at home.

Ellsbury has been one of my favorites and is only one of three active Native American players in the Bigs. The other two being Kyle Lohse and Joba Chamberlain. Although plagued by injuries a healthy Ellsbury is quite the threat. He finished second in MVP voting ultimately losing out to JV in 2011. I wish Topps would bring back this set, but instead we're stuck with online code gimmicks and so many inserts that it's damn near impossible to complete a set.

Thanks Dustin for the great trade. I'll highlight the other cards soon!
Posted by A2 Wolverine at 5:51 AM 3 comments:

I think it's been at least 6 months since I last got on, and even longer since I posted anything. Starting today that will hopefully change. I have plenty of new cards to profile. Seriously I have a stack larger than Allen Iverson's ego sitting on my desk. There have been Some crazy life changes since I last updated this thing as well. Mainly, I started my first big boy job at the wonderful University of Michigan, I got engaged to the most wonderful woman I know, and I witnessed the Tigers blow the World Series in game 4 to the surprisingly likable Giants.  I hope to eventually write about all of these things at one point of another, whether here or somewhere else.

Let's get back on track this is a blog about baseball cards and all. This card comes from my good friend Will over at foulbunt.
Hey sweet! I was 2004 OF prospect drafted by the Rockies! I should at that to my Linkedin profile and see if anyone calls me out on it. So I was born in Salem Oregon in 1982 and attended Galena HS in Reno, Nevada.
I was originally drafted by the Os in the 21st round of the 2001 draft. I turned them down and was then drafted in the 9th round of the 2004 draft by the Colorado Rockies. I never made it to the Bigs, but did finish with a .267 batting average. That's good right?

In all seriousness this was a great card when I opened it up. It now adorns my office wall.
Posted by A2 Wolverine at 7:59 AM 2 comments:

Want a chance to win some sweet cards? Then check out this contest at http://number5typecollection.blogspot.com/ 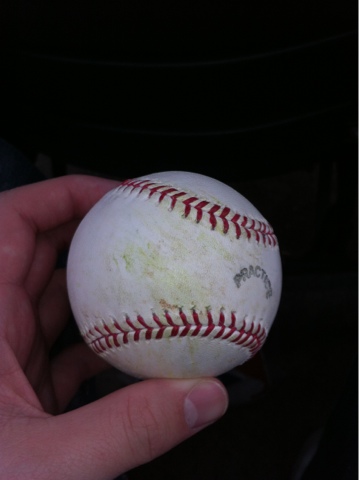 For those of you not in the Detroit area Verlander just pitched a great game, and was 2 outs away from a no-hitter. It would have been his 3rd. He's certainly made my time in Michigan enjoyable. Hopefully he'll continue to dominate this season. Repeat Cy Young perhaps? 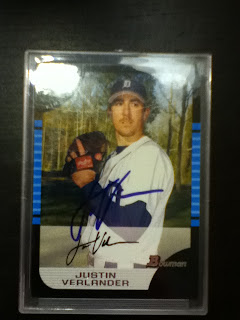 Guess I have to change the blog name

Not really, but a few months ago I finally pulled a relic. It only took spending $1,000,678.34 at target before it finally happened and the pack wasn't even from there! Anyways I was going through my Christmas stocking, man it has been awhile since I've blogged, and my brother picked me up a couple Topps update packs. My first thought was man this is a large pack. As usual I figured it was a dummy card.
Sifting through Marlins, D-backs, and Gio Gonzalez I found this.

Shitty cell phone picture aside it's a pretty cool card. I know a lot of people think he's a cheat but whatever. It's a nice looking card. I would have been more happy with a JV relic or Mighy but beggars can't be choosers. 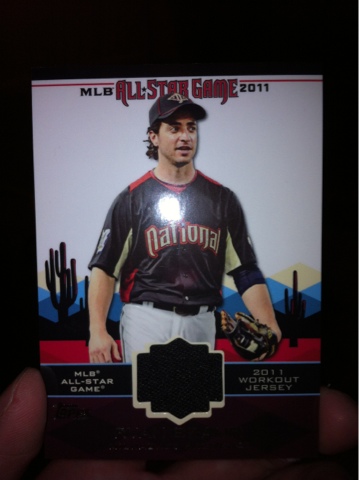