It's that time of the year again.

It's that time of the year again. I dread this part of the season when the Tigers face the Mariners. As a Tacoma transplant living outside of Detroit I'm commonly asked which team am I going to root for? This is like asking me if I like like Black Flag with Henry Rollins or Henry Rollins by himself? It's not an easy decision. I grew up with that Mariners playing in the background to my childhood.
I witnessed the collective gasps of an entire city when Griffey slammed into the outfield wall and broke his wrist. I've seen the hopes of a city reach staggering heights when Edgar stepped up  to bat in the 11th inning. I've seen Judas accept money worth more than an entire team, how's that feel Texas fans? Speaking off Judas I met him as kid when my elementary school got to tour Tacoma Rainiers ball park. A-Rod actually seemed like a nice guy, he signed something of mine which I have since lost. That's life when you're six.The team in the 90s is definitely not the team today. My childhood heroes have since retired. No more free admission for shaving your head on Jay Buhner day. No more Griffey wowing fans with his perfect swing. No more Edgar stepping to the plate in clutch situations.
That's life, the Mariners have gone through their ups and downs and I've sat back and watched the team wallow in their mediocrity for way too many seasons. Luckily there is hope for the future. Felix Hernandez, though losing velocity, is a pitcher every team pines for. I know many Mariners fans will disagree, but I believe we should trade or sell him while his value is high. Maybe we can actually get a someone that can hit, whose name doesn't begin with an I. This isn't the 2000s anymore Ichiro's abilities aren't what they use to be. A stellar pitching staff just need the offense to get them the wins.
Since moving to Michigan almost 5 years ago I fell in love with baseball culture out here. Even in 90s when the Tigers were godawful they still had fans coming out for games at old Tigers Stadium. Recent years they under performed with such a talented lineup. I know many fans want Leyland out and I don't blame them. The man puts Inge into the everyday lineup and then  finds convoluted reasons as to why it had to be done. I understand Inge is the Tigers mascot he was with the team at their absolute worst and at their best. It's the nostalgia, which brings me to the point of this post. I'll always have an affinity for the Mariners, but the nostalgia of the my childhood wont make up for the years of watching awful baseball. Just like the nostalgia for Inge wont make up for his .056 batting average (or whatever it's at now) I hope the Mariners put up a fight against Tigers, but for the next 3 days I will taking off my Mariners cap and cheering for the Tigers.
Posted by A2 Wolverine at 7:27 AM 3 comments:

It's weird getting back into writing for fun, and on a topic not related to democratizing countries. As you know Valentine's day was only about 2 months ago, but I received an awesome gift, from my awesome girlfriend. A sports memorabilia shop finally opened up in downtown  Ann Arbor. For the most part the merchandise was Michigan Wolverine related. I mean the owner had football programs dating back to the 20s. Unfortunately I'm not much of a football collector. There were baseball goodies there too, much to my surprise. Digging through antique gloves and signed pictures of Denny McClain I found this gem: 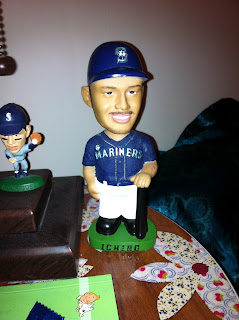 (Don't mind my hipster end table or my Tin-Tin comic book.)
Seriously though how awesome is this?! I would have never have thought I'd find an Ichiro bobble head all the way out here in Michigan. He makes a nice addition with Judas(A-Rod) next to him. I really need to start buying some shelves for my expanding collection.
Losing Griffey was tough. I grew up watching him, Edgar, and Buhner putting Seattle on baseball's radar. As a consolation prize Seattle signed some Japanese superstar. We somehow managed to replace the man with the best swing in baseball for one of the best hitters since Pete Rose. It definitely lessened the blow.
I was grateful when my girlfriend picked this up for me when  had my back turned, and made Valentine's day that much better.
Posted by A2 Wolverine at 5:25 AM No comments:

Quick update and a graduation gift

Hey guys I apologize for disappearing these last few months. I took a research position which ate up most of my free time, but the opportunity was too good to turn down. Classes are wrapping up and I'll soon be an alumni from one of the greatest universities in the world; the University of Michigan.

Anyway one of my good friends, William from over at Foul Bunt, wanted to get me a gift in celebration. I told him he didn't have to get me anything since he's been sending care packages of all of his Tigers and Mariners cards throughout the semester. He certainly didn't disappoint.
I couldn't believe it when I looked into the box. The Kaline ball was a great addition to my Tigers collection. He also sent me a huge stack of Johnny Damon cards which I'll highlight soon.

Thanks again Will! Let's hope we can work out a deal for Ethier too my team is taking a beating with offense. 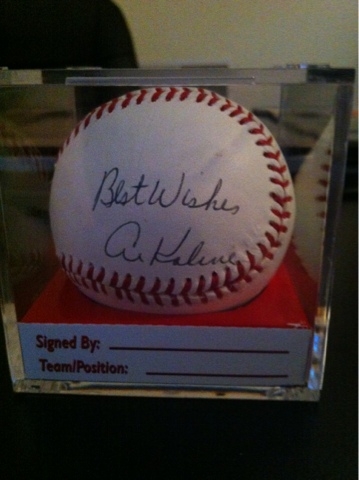