Pineda to the Evil Empire

At least it's not Felix right? Right? 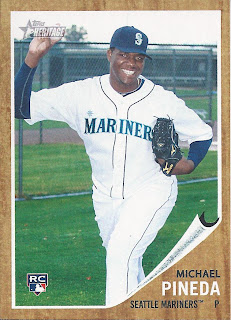 So I'm sure many of you have read by now that Michael Pineda has gone to the Evil Empire in deal that brought a catcher that can't catch to Seattle. Jesus Montero can crush the ball at the minor league level and in a hitter friendly major league ball park. I hate to see Pineda leave after a year for the Mariners, but the Mariners' brass being the cheap asses they are swapped a young pitching prospect for a hitting prospect to win the fans over. We were never in the running for Fielder, it was all smoke and mirrors. Even if we were gonna make a push for him why would Fielder want to come play for a mediocre team that has consistently squandered talent? Our biggest goal each season is to not finish below the Athletics.  Maybe hitting will pick up this year; a healthy Smoak, Ackley, and Montero could give the Mariners a line up that isn't the joke of the American League.
I guess Mariners fans can rejoice in the fact that hey at least we're not the Pirates.
Posted by A2 Wolverine at 8:43 AM 1 comment: